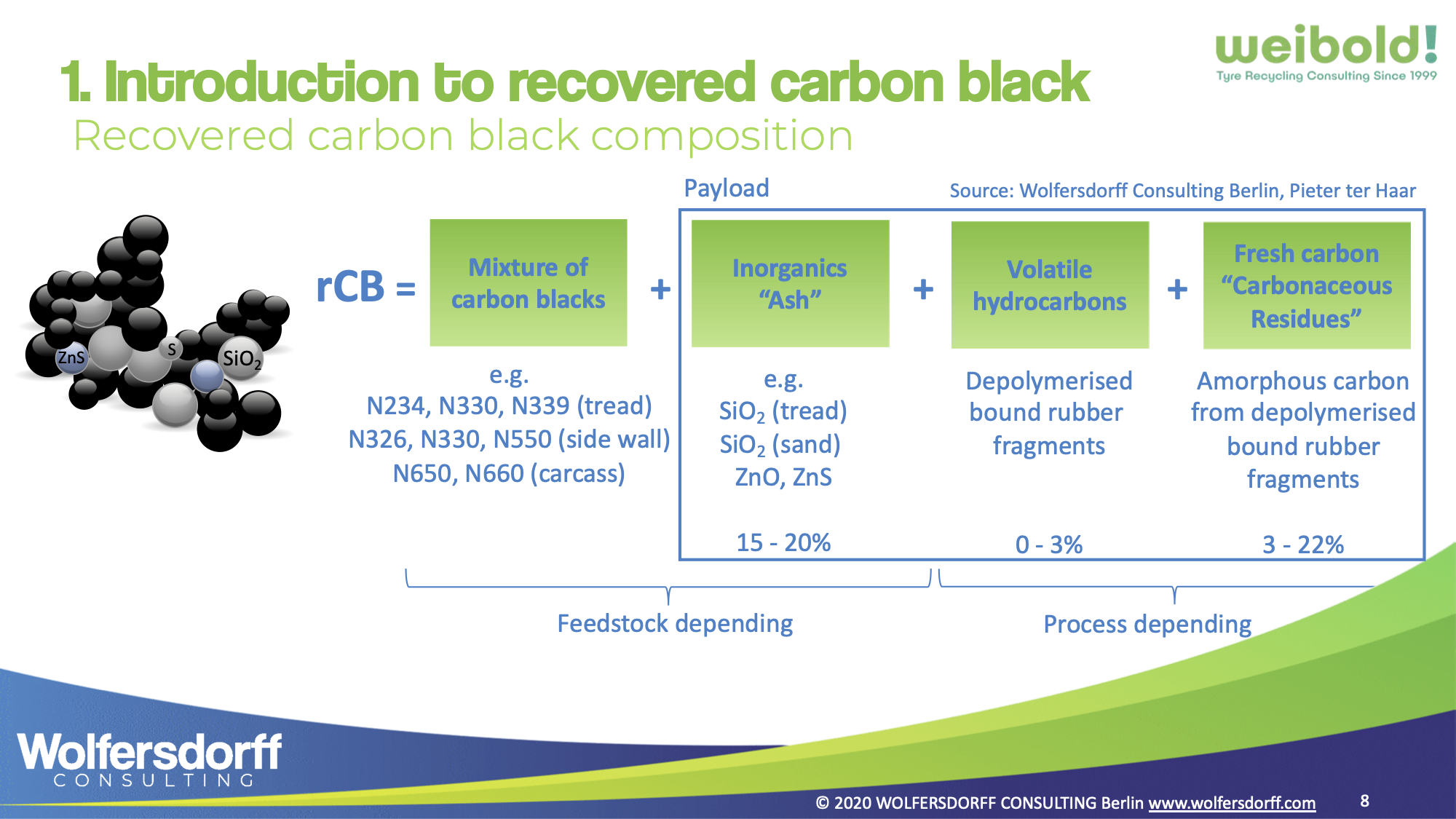 04 May Questions and answers on recovered carbon black

Posted at 12:00h in Q&A by Martin Von Wolfersdorff 0 Comments

Did you ever wonder what the markets could be for recovered carbon black?

During my webinar presentation “Recovered Carbon Black Markets” within the Robert Weibold Academy, I presented on my definition of recovered carbon black and different ways of looking at markets for recovered carbon black, including a brief outlook on the rubber industries post COVID-19. The webinars were hosted by Robert Weibold‘s team, Augustina Martin and Sergej Kononov.

In the afternoon webinar we had a nice Q&A session, but time was too short for questions in the morning session. You can now read a complete rework of all Q&As here in this Linkedin article! 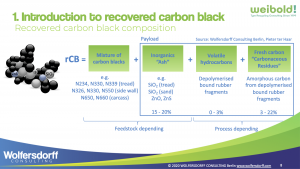 “Question 1: How easy is it to store recovered carbon black?”

“Normal” rCB, as defined in the webinar, should store like virgin carbon black. Storage conditions (dry, room temperature, away from sun) are important, as well as packaging (silo, big bag or smaller 10-20 kg plastic bag). What could happen? Under normal circumstances, only moisture pickup due to capillary condensation or due to temperature drop. In extreme cases contamination with other materials, algae etc. If the recovered carbon black has content of ZnO or PAH (which it should not), water toxicity can lead to environmental hazards if water enters the packaging and gets into the ground. Shelf live is typically defined as one year, but carbon black or recovered carbon black are not perishable goods. The shelf live of one year corresponds to the re-testing time for quality insurance.

“Question 2: Are there different grades of recovered carbon blacks, similar to the ASTM grade categories for carbon blacks?”

A big challenge for buyers of rCB is that every rCB is different (e.g. different feedstock, different process, different refining). The current product evolution is that most of the producers only have one grade and some producers, like Black Bear Carbon, have low ash and high ash grades. The ASTM workgroup D36 is working on test methods and quality definitions for recovered carbon black.

“Question 3: Do we mill aggregates? Aren’t they too hard for mechanical destruction? I was under the impression that we are milling agglomerates.”

It depends on which aggregates we are looking at. We are not milling the aggregates of the virgin carbon black, which are sized from 0,09 μm – 0,50 μm and which are fused at about 1.700°C in the carbon black furnace process.

We are milling recovered carbon black aggregates, which are sized from ~18 μm – 1 mm and which are composite aggregates composed of the carbon blacks from the tire, the inorganic ash content, fresh carbon and volatiles. rCB milling narrows the particle size distribution to typically ~1 – 10 µm.

Question 4: “Which are the most important parameters for a batch tire pyrolysis system in order to get a top quality recovered carbon black without jeopardising the quality of the pyrolysis oil?”

There are technologies, for example Black Bear Carbon, that are using a two stage pyrolysis. Then we can get the best of both worlds, the first stage for the oil, the second stage for the recovered carbon black.

For a tire pyrolysis batch process, it will be beneficial to specialise in plastic masterbatch applications. A batch process produces more addition carbon from polymer carbonisation than a continuous process. For colouring applications like masterbatch, this is a benefit. For maximising colour, we can then further increase carbon content by choosing truck tire tread as feedstock.

Question 5: “What does the quality of recovered carbon carbon black depend on most? Your presentation mentioned the type of tires and the type of pyrolysis, what else?”

Of course, the the refining as well because you you might use a jet mill and mill way below 10 by 10 or you use a mill that is more affordable hammer mill will be tricky, will be at the limits to a mill that that fine palletize plays a role.

The substitution rate will depend both on the type of recovered carbon black and the application. A typical rCB from whole passenger car tires will be close to ASTM N700 (SRF) carbon black performance in rubber. If we want to substitute an N600, N500 or even an N300, it will likely only be possible in part-replacement.

Question 7: “What is the percentage of recovered carbon black we get from plastics recycling with a pyrolysis process?”

Question 8: “Are there companies specialising in recovered carbon black upgrading?”

Yes, there are companies specialising in recovered carbon black upgrading, both on the operational side and the technology supplier side. A new industry segment is currently building with companies that are refining raw carbon residue from other tire pyrolysis companies. On the technology supplier side, there is for example Klean Industries who supply turn-key recovered carbon black refining systems.

Question 9: “Is the market requesting a specific volatile content limit in Europe vs. North America?”

Question 10: “Can different types of tires be mixed for the production of recovered carbon black or can only one type of tire be processed at once?”

Because of the diversity of tires, it will be very difficult to process one type of tires at a time. Not only do we have different types of tires (e.g. passenger and truck tires) and different brands, but inside each tire there also are 10-14 sections of totally different composition.

It is important to control the tire feedstock input, which defines the chemical composition of the recovered carbon black produced. How can we do that?

We can also test the tire feedstock with a thermo-gravimetrical analysis (“TGA”), which indicates the ash content of those tires. We could then segregate tires with similar ash content.

Finally, we can also use an online-XRF-analysis to measure the silica content of tires going to the shredder and segregate for silica content. This is a smart technology patented by Black Bear Carbon.

Even one step further, we could look at segregating tire sections like tread, sidewall or innerliner and then pyrolyse those separately. This would represent the highest level of feedstock control and would produce the most consistent recovered carbon black.

Question 11: “We learned that batch tire pyrolysis processes tend to produce more fresh carbon than continuous processes. Why is that?”

The actual kinetic process of char formation is not very well researched, but some of the elements playing a role are reactor residence time, reaction pressure and reaction temperature. Char formation is believed to come from the bound rubber around the carbon blacks used in the tires. The bound rubber decomposes under pyrolysis conditions. If the decomposition products are not evaporated and not separated from the carbon blacks, they can form polycyclic aromatic hydrocarbon networks. These networks can grow and eventually solidify into char.

The typical batch tire pyrolysis process has a long residence time of ~8 – 14h, which favours char formation. Continuous processes typically have residence times of ~1h, during which less char is produced. In turn, continuous processes often have difficulties eliminating all volatile hydrocarbons from the raw recovered carbon black. Microwave and vacuum processing can also be helpful for minimising char content. The lowest char content that I have seen in analyses and journal articles is ~3% and it was reported for a vacuum pyrolysis technology by Christian Roy, who has conducted excellent research about recovered carbon blacks already in the 1990ies. The char content I have seen reported by Pieter ter Haar for batch pyrolysis was 7 – 22%, depending on the type of carbon black recovered. 22% was for recovering rubber containing ASTM N100 carbon blacks, as they have the largest specific surface area and hence the most bound rubber on the surface, which can convert to char .

Question 12: “Are there applications which rule out a recovered carbon black produced on a continuous process?”

Question 13: “What advice can you give to an investor who wishes to invest into American pyrolysis technology and to operate the plant in Europe?”

We are looking at a global niche industry. If we pick technology from one region and want to operate in another, we will need to make sure that the process is tuned to the feedstock supply of the operating region. In Europe, for example, passenger car tires typically have more silica in the tread section. This creates a higher ash content in the recovered carbon black, which does not impact rubber performance but it reduces colouring performance. We then need to pick the right market for the recovered carbon black, in this case the rubber market would be best.

Did you like these Q&As about recovered carbon black? Download the slides and the entire video recording on https://wolfersdorff.com/webshop/webinar-video-recovered-carbon-black-markets/!

Sorry, the comment form is closed at this time.